At the end of a three-year relationship, Courtney Santana had suffered broken eye sockets, a broken chin and bruised ribs. She had also lost another baby. Her boyfriend had been to jail multiple times for abusing her. Sixteen years later, Santana is the founder and executive director of  Survive2Thrive Foundation, a nonprofit in Austin that helps victims of domestic violence who are turned away from shelters.

According to the Texas Council on Family Violence, of the 23,311 victims that sought shelter in 2014, 39 percent were turned away due to lack of space.

Santana said her boyfriend came by her apartment one day in 2000 to try to work out their relationship. She was ready to forgive him again. He walked out of the room to use the bathroom, and Santana picked up his coat to hang it in the closet.

A gun fell out.

She looked at her 8-month-old son on the couch and thought of her 2-year-old daughter in her bedroom.

“And I, like, crept and grabbed both of them and rolled down the street with the lights off,” she said. “I didn’t wanna accelerate because I didn’t want him to hear.”

Santana took her children to SafePlace Austin, a local shelter for victims of domestic abuse. She left behind her house and her boyfriend, breaking the cycle of physical violence that affects one in four women in the United States.

Santana grew up in a musical family, and she had always looked to dancing, acting and singing as catharsis. Santana found herself needing a creative outlet for “the nasty stuff” she was felt during the three months she lived at the shelter.

“I wrote close to 200 songs,” she said. “It was just coming at me. I guess it was a journal, but I was just writing out music.”

It took time and help along the way, but Santana eventually secured a stable life for herself and her children.

“And after that, I just decided I wanted to go back and create hope for the community that I was now a part of,” she said.

She sat on the [board] at SafePlace, often speaking publicly about her personal story of abuse and urging other victims to find refuge in local shelters. But at the end of her speeches, people would approach Santana. They’d tell her that as inspiring as her story was, they were being turned away at the shelters. That’s when she learned about the waitlist problem.

The Victims Who Fall Through the Cracks

While many victims turn to shelters like Salvation Army, others are forced to return to their violent home. About 75 percent of women who died at the hands of their abuser were killed after they tried to leave or after they’d left the abusive relationship, according to the Center for Disease Control.

By connecting victims to housing, child care, legal aid and career services, victims can begin the healing process, Santana said. She looks back on her own experience and wonders what would have happened if she had been put on a waitlist at SafePlace when she needed it the most.

“That’s my motivating factor,” she said. “What if I had been turned away? Where would we have gone? I didn’t have to sleep on the streets at all. I had a warm bed, my kids and I. As miserable as I was, I wasn’t homeless.”

Santana said one of the challenges of her job is convincing survivors that they have what it takes to overcome the hardships that accompany domestic violence — not only emotional or physical trauma, but more logistical problems like taking their children out of school, changing jobs and relocating.

By now, Santana said she has worked through her PTSD with counseling and only occasionally  has flashbacks. But it’s never when she’s working with her clients.

“It’s more frustration when dealing with my clients because I want them to, ‘Come on, let’s do this,’ you know, and if they don’t want it for themselves, I can’t force them to want it,” Santana said. “But it’s coming. In my heart I know it’s coming. So I get patient again, and I keep moving.” Awareness at the Super Bowl

Courtney Santana tells fellow organization members that men are often excluded in the domestic violence movement. The group wants to raise awareness during next year’s Super Bowl in Houston.

I was putting the finishing touches on my radio piece for NPR’s Next Generation Radio project when I remembered this isn’t the first time I’ve been trusted to share the story of a woman who lived through domestic abuse.

Last semester, I found out that someone I saw nearly every day for two years had been in an abusive relationship. I wrote about her story — one of healing, strength and sisterhood — with a looming sense of anxiety about getting the details right, and more importantly, capturing her experience in a way that told her truth.

I heard Courtney Santana speak at an event earlier this summer. I was drawn to her story as well, one of incredible strength and compassion. Not only did she survive her trauma, she turned around to help others do the same. I thought of her later when I began brainstorming for my radio project.

The editors picked unusual jobs as this year’s theme, and although advocacy work is abundant and often inspired by personal experiences, I still found myself wanting to tell Courtney’s story.

Many people know the statistics, that domestic violence affects one in four women and one in seven men. But Courtney is unique in that she discovered such a simple solution for a problem that very few people know about — the waitlist problem. She spends just as much time raising awareness for this problem as she does working one-on-one with clients — victims sent her way by the shelters at capacity — to get them out of harm’s way and back on their feet.

And she has a damn good singing voice, to boot.

Like with any story, especially one told in less than five minutes, there are a lot of details about Courtney and her work that didn’t make it into the final edit. But if only a few people click play — if even fewer land on Survive2Thrive’s homepage after listening — I know that Stella and I have pushed ourselves to tell Courtney’s story in the most truthful way we know how. 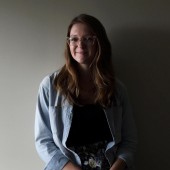 Kris is a senior from San Antonio majoring in journalism with a Spanish minor at the University of Texas at Austin. So far in her college career she has served as the co-editor-in-chief of ORANGE Magazine for three semesters; worked as a photographer for Longhorn Life; and interned at Austin Monthly Magazine, San Antonio Magazine and local nonprofit B*Tru Arts. Although her life aspirations are constantly in flux, she is certain of her passion for telling human stories. Outside of school and work, Kris practices yoga, attends poetry slams and spends time with her cat.