This man predicted Zika’s path in the U.S. and he’s not happy about it University Of Texas Professor Sahotra Sarkar chuckles when he thinks of how often he’s been interviewed the past six months.

Reporters have been calling the professor of philosophy and integrated biology more now than in his entire 20-year academic career. It’s all because of a map he and his colleagues created, which accurately predicted when and where Zika would hit the U.S.

“We had predicted months ago that the first places most at risk for these things [were] going to be in Florida, and Miami was at the top of the list,” Sarkar said.

Sure enough, Zika sprung up in Florida.

“I got an email from somebody in the Department of State Health Services about two days before it was officially published, and then a lot of people immediately wrote to say that we got it right,” he said. “But it was one of those cases that yes, we got it right, but we can’t really be happy about it.

We’d have much preferred if it hadn’t been established at all.”

Sarkar didn’t start out collecting mosquitoes, or mapping them.

His early work was in conservation biology, which stemmed from his early love for the natural world.

He grew up in Darjeeling, in the Himalayan foothills of Northwest India. He saw forests get cut down and wildlife, like pandas, disappear. On visits home, he’s seen more change.

“The last time I was in the Himalayas I noticed the light pollution,” Sarkar said. “What used to be unbelievably dark skies and nights are now this grey sky not different from Austin.”

With what Sarkar describes as a “sprawling spread,” settlements continue to develop along mountains with elevations of over 20,000 feet.

In his academic life, Sarkar has followed many interests: physics, math, philosophy, and biology. That’s led him to a specific corner of research: neglected tropical diseases. They’re also known as “diseases of poverty.”

“Being mainly in the philosophy department, I had no pressure to just work on things that everybody else works or things that are high profile,” he said. “I use the freedom and the opportunity to actually do things that I think are ethically most important, which is to focus on these neglected diseases.”

Sarkar was tracking mosquitoes that carry dengue fever, and it was that work that laid the foundation for his data on Zika.

“It just turned out by accident that the insects we were interested in also happen to be the ones most relevant for Zika,” he said.

When it comes to the question of what to do next on Zika, Sarkar names two priorities: more money for vaccines and mosquito control, as well as better prevention strategies in Southern states.

This summer Congress failed to pass its $1.1 billion bill to fight the disease. What bothers Sarkar the most is how funding for Zika has been politicized.

Meanwhile, basic questions remain unanswered. Sarkar explains that we still don’t know why the Zika outbreak happened in the first place. But, this he knows: diseases of poverty need more attention.

Created in spring 2016 by UNSW Australia’s Lauren Gardner in collaboration with Professor Sarkar, this interactive map shows that 37 of the top 100 cities that are likely to experience the Zika virus are located in the contiguous United States.

The map takes into account the suitability of habitats for two mosquitoes species along with air transport patterns. Darker shading indicates higher risk. Click on each city and see an estimation of relative risk (between 0 – 1) for both the Ae. aegypti and Ae albopictus (composite) or simply the Ae. Aegypti.

Credit: This map was created by Lauren Gardner at UNSW Australia in collaboration with Sahotra Sarkar at the University of Texas. Before the Next Generation Radio project began, I set three goals for myself:

I’ve always gravitated toward crafting profile-style stories ever since secondary school, when I competed in UIL Academic writing contests and excelled in feature writing. And in college, especially my most recent experiences in public radio, a story’s timeliness, quality, and conciseness are paramount.

For this post-grad project, I wanted to challenge myself and create something different, and also out of the ordinary from previous stories Next Gen has produced. Both of those challenges came with a vengeance.

This week, I learned to go with my gut. If something doesn’t feel right, then there’s room for improvement. Fight for the ideas you really care about. Make a plan, but be flexible. Listen, but be present. Now, I will make it a standard to explain some crucial tenets of audio storytelling with every subject, such as “please try to answer in complete sentences,” “remember to speak slowly,” and “speak as if you’re painting a picture for our audience.”

Endless thanks to my mentor Eve Troeh for giving me unfailing support and the motivation to make any situation “workable.” The Next Generation Radio project has been such a rewarding experience and I hope to pay forward in the future as a mentor! 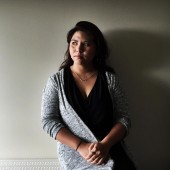 Jan Ross Piedad is a recent graduate of UT Austin’s School of Journalism. For spring 2016, she interned at NPR Washington’s Newsdesk and for the network’s mid-day show, “Here & Now.” Jan Ross’ work in public media began at KUT, as an intern and eventual web editor for “Texas Standard.” Her interests range from global development to pop culture and media literacy. She hopes to produce engaging stories that people would want to share.