Instructor and general manager Victor Krusi isn’t your typical Skydiver. While he does leap out of planes at 100 miles-an hour speeds, he denies the stereotype of being an adrenaline junkie.

“Many people might put that term (adrenaline junkie) on people who skydive…but I think deep down we’re all just normal human beings who have a passion for jumping out of airplanes.”

Krusi has been skydiving for over 20 years, and picked up the hobby during a 14th anniversary vacation with his wife in Hawaii.

“At the time I was a pilot and I was flying airplanes more than anything else. but she fell in love with it right away and learned probably two months after she did her first tandem.”

As general manager of Skydive San Marcos, Vic wears many hats and several suits (expect to wear a neon suit of your own if you go for a dive, they’re colored by size). On top of overseeing everyday operations, he also facilitates the “drop zone”-  the designated area where skydivers land.

“I don’t have a normal day…Basically the best way I can put ‘my normal day’ is I spend my day herding cats and putting out fires.’”

Vic’s wife, Connie, also picked up where the anniversary left off all those years ago and works at Skydive San Marcos as a chief instructor. As Vic notes, being a skydiving instructor comes with a unique set of challenges.

“The hardest part about teaching somebody skydiving is teaching people to have a whole-body sense and awareness…you’re trying to teach them about aerodynamics not only under a parachute but with your own body as it falls through the air.”

For some, the obstacles of the learning curve pale in comparison to the fear of taking that highly anticipated plunge. While some may be brave in body-sailing through uncharted territory, others can be convinced that they’ll never live to see the light of day again. Vic says that’s to be expected.

“I would imagine every single person I take out on a tandem – for however short a period of time it is –  is quite certain that they’re going to die and I’m going to be the person who’s going to kill them. That may go away in a nanosecond or two seconds or three.”

According to Vic, the risks associated with skydiving are just one of a million unchallenged fears that many people simply choose to avoid. And while the jury may still be out on which paths of life may encompass the best outcome, he’s come to his own answer when it comes to skydiving.

“Y’know people are afraid sometimes I think to take any risks in life and I don’t know whether that means you’ve lived or not, but there’s no harm in trying it.”

Perhaps the most fulfilling part of Vic’s job is paying homage to his fellow veterans. As a former chief warrant officer in the coastguard, Krusi embraces the opportunity to give vets a once in a lifetime experience.

“We have an event here at least once a year that we call the leap of the heroes, we do work with the wounded warrior foundation and we’ve taken a number of disabled veterans on skydives. My personal favorite story is we took a kid who was out here celebrating his 21st birthday. He had lost both legs in Afghanistan from the knees down. I took him on a jump and I still have a picture of it to this day.”

Some people take up hobbies or sports. Some people binge-watch Netflix. Vic dives out of planes, and even in the midst of a 13,000 jump career, he still feels a rush of escapism that only the sounds of wooshing atmosphere can provide.

“Skydiving brings me probably the same thing it brings everybody else…momentary release from the stresses and pressure of life.”

Don’t expect any complaints of job-related stressors from Vic anytime soon. He remains enthusiastic and constantly refreshed by the choices he’s made regarding his career path. Though it wasn’t always this way, his past may strike a familiar tone.

“I have a job that I enjoy, It’s always different and it’s always challenging and it’s not boring or mundane, and I don’t know that I could ever go into an office building and watch a time clock all day…I did that for a number of years.”

Over the course of his career, skydiving has exposed Vic to new worlds. In the midst of diving through the troposphere, he’s managed to open his eyes to the people floating across from him and recognized the similarities that remain in flight between them, rather than differences that would otherwise send them spiraling apart.

“I’ve been on events where there were skydivers from five different countries. None of us had ever jumped together before and within four jumps 120 people from five different countries were able to make a formation in freefall. If skydiving can add anything to the world it’s that you can jump with anybody, you can get along with anybody. I think if more people realized that people are just people instead of labeling them then I think the world would be a better place.”

A peek into the work environment of a San Marcos, Texas skydiving instructor. Vic Krusi’s demeanor was at times paradoxical. Throughout most of the interview he kept a stern composure, but in other parts he displayed an eccentric sense of humor. Above are some excerpts that showcase his knack for delivering odd (but hilarious) bits of perspective.

Vic Krusi has been involved in his fair share of creative marketing endeavors. He and his company, Skydive San Marcos, helped out with a special commercial for an annual music and river festival in San Marcos, Texas. Check out their unorthodox methods for cruising the clouds.

My curiosity to uncover the more technical side of storytelling motivated me to apply with the Next Generation Radio Project. I produced my first storytelling piece earlier this year during a trip to New York and while I was ultimately satisfied with the piece, the inner editor in me couldn’t help but wince. All of the possibilities of what the piece could have been flowed through my mind, and through each listen and hypothetical revision, I was discouraged about what I thought my limits were.

So when I heard that I was accepted into the project, I was absolutely ecstatic. The thought of getting hands-on learning from professional journalists was almost too much to handle. That excitement was only amplified when I learned that my mentor for the project would be THE Jennifer Stayton of KUT’s “Morning Edition.”

I’ve actually heard Jennifer on the radio before, and had always thought that her voice and delivery were awesome. As an audiophile and narrator myself, the delivery of a program’s introduction is something that I admittedly obsess over. During my favorite programs’ intro, it’s not uncommon for me to pretend to be the host. Each introduction has the similar “I’m _ _ _ _ “ Lakshmi Singh, Jack Spear, Kai Ryssdal, I’ve impersonated them all. When it comes to “Morning Edition” and KUT, I’ve been Nathan Bernier and believe it or not, I’ve also been Jennifer Stayton.

Jennifer proved to be an inspirational resource. With her experience and guidance, she helped spark solutions to my audio traffic jams, and provided helpful tips to navigate through professional development.

The experience of interviewing Victor Krusi of Skydive San Marcos was insightful. I’ve always been curious as to how a professional skydiver conducts day to day business, and Victor provided a good sense of that. What interested me the most though, was Victor himself. Before I met him, I expected a stern and somewhat rigid interview process. His emails during our correspondence were incredibly short and to-the point. Before Jennifer and I had even arrived at Skydive San Marcos, I ran through exercises in my mind of how I could possibly get longer answers out of him. Luckily they weren’t needed.

Victor’s demeanor shifted through various points of our interview, but as a whole he demonstrated an eccentric sense of humor that I deeply appreciated. During the editing process I couldn’t help but giggle every time I heard him say “I would imagine every single person I take out on a tandem for however short a period of time is quite certain that they’re going to die and I’m going to be the person who’s going to kill them.”

Through the editing presentation I learned how to reduce popping effects and cancel out harsh utterances in words, as well as how to effectively reduce noise and utilize ambience in a way that I’ve never tried before. I’m extremely pleased with the final product.

All in all the Next Generation Radio Project was a successful enterprise in my journey to become an advanced storyteller. Through the help of my amazing mentor and Traci Tong,  the Next Generation Radio Project has emboldened me to continue striving for the best quality audio content that I can provide. With the newfound strength that I’ve gathered through this experience, I now know that when it comes to hard work and fulfilling my vision, the sky’s the limit. 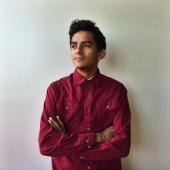 Greg Arellano is a freelance journalist, tech nerd, political junkie, and film fanatic. He’s currently studying electronic media at Texas State University in San Marcos, Texas. Greg currently serves as President of the Association of Hispanic Journalists at Texas State. He is also Creative Director and Head of News Media for Off on A Tangent- an international creative arts collective. Greg works as a junior producer in the multimedia section of KTSW 89.9 FM, the college radio station of Texas State University. When he’s not surfing the web, you can usually find Greg reading or working on a new film project.