David Williamson tried to deny his fate for a long time.

As the son and grandson of professional taxidermists, Williamson was hesitant to follow in his family’s footsteps.

“I’m pretty sure I thought [taxidermy] was kind of a crude, redneck type of profession,” he said. “Maybe because my mom and dad got divorced when I was really young and my mom wasn’t a big fan of taxidermy.”

Williamson warmed up to the trade, however, when he realized he had a knack for the craft – from skinning bobcats to mounting hunting game. Nonetheless, he pursued a degree in accounting and worked as a certified public accountant for Whole Foods in Austin while honing his taxidermy skills on the side.

After years splitting his time between what he calls a normal job and a curious passion project,  Williamson finally accepted fate, dropped his full-time job and now stuffs dead animals for a living.

“It is surprising that I end up exactly where I started. It makes me think a lot about life in general and how we’re all kind of born into life,” said Williamson. “I didn’t choose to be born in the ’80s and I didn’t choose to be bald and have blue eyes, but for whatever reason I came into the world and the trajectory was as a taxidermist.”

When taxidermy is done right, dead animals are given new life.

There’s some wiggle room of course, says David Williamson, a taxidermist in Austin.

“There are a lot of things in taxidermy that you can get away with that most people don’t know,” he explains. “Nobody actually knows what deer look like, so they think mounted deer looks realistic. You can look at a bobcat mount and very quickly know that it’s a bobcat.”

But when things go really wrong – anyone can tell. As with any finely-tuned craft, some artists aren’t as talented as others. Take a look at taxidermy that didn’t quite go as planned.

The taxidermy I spent my past few days looking at ??? #badtaxidermy pic.twitter.com/THNbFAL1uf

I shouldn't find this funny as I'm sure this was once someone's beloved pet #badtaxidermy https://t.co/Q9EPdA38p8 pic.twitter.com/54WIyXLGdQ

The Art of the Uncanny

Although taxidermy has been around for centuries, it’s only recently that artists have been tweaking the craft. Rogue taxidermy, the pop-surrealist art of adding unconventional components to otherwise lifelike taxidermy, has recently been embraced by taxidermists around the world. A boar with wings? Check. Horse hoof heels? You bet. Here is some rogue taxidermy that succeeds in juxtaposing the bizarre and the beautiful.

Without prior experience in audio storytelling, I was a bit nervous to be a part of Next Generation Radio. Thankfully my mentor, Ashley, was as supportive as she was happy to help me flesh out all aspects of my story.

As a vegetarian, I undoubtedly picked one of the most counterintuitive careers to profile, but that was sort of the point. Part of the reason I love journalism is the ability to get up close and personal with people I never would’ve encountered in daily life.

Initially, I found David Williamson’s profession to be a bit gruesome, but I came away with a greater appreciation for the art of taxidermy and admiration for the amount of detail David puts into his craft. David’s introspection on the trajectory of his life gave heart and depth to a story that would’ve otherwise been one-dimensional.

I’ve learned more about storytelling this week than I’ve learned in the past three years as a journalism major, and I’m incredibly thankful for the hands-on experience. 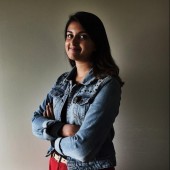 Ashika is a senior at The University of Texas at Austin, pursuing a degree in Journalism and a Business Foundations Certificate. She’s written for multiple publications in Austin including ORANGE Magazine and Austin Monthly. After graduation, Ashika plans to pursue a career in multimedia journalism. In her free time, Ashika can be found spending a shiny penny at Alamo Drafthouse or chugging copious amounts of cold brew at the local coffee shop.