After work, Odette Tan rushes to a dance studio, where she might practice a new move or just place herself on the floor to relax. Tan is a civil engineer by day, but during the evening she becomes a pole dancing instructor.

Odette Tan first touched a dance pole in 2010. Tan and her friends took a class for fun during a bachelorette weekend in Cabo San Lucas, Mexico. She had gained weight during college, and didn’t know how to drop the pounds. She was also “too cheap to go to a 24 Hour Fitness.”

However, this workout was different from yoga class, where she describes “mentally screaming” as the soft music played in the background. Pole dancing offered her different feats.

“I was getting toned, and I could finally see tone in my arms,” Tan says. She went from a size 12 to a size 2.

As she continued to pole dance, she began identifying herself differently as well. At first, she called herself a “pole trickster” because she wanted to go from one pole dancing trick to the next. There wasn’t much fluidity to her moves because she had to stop between tricks.

She had to learn how to dance with the music, not just stand there, she said. Only after four years of practice did she begin to adapt the term pole dancer.

“You turn on the music and I can flow around the pole and not have to think ‘what’s the next trick that I want to do?’” Tan said.

Tan started teaching in 2012 and is currently giving classes at the Brass Ovaries pole dancing studio. Over the years, Tan has learned how to speak to students in different levels of expertise. Sometimes she needs to be more graphic in her descriptions so that students understand how their bodies should be moving.

“I will have to be very graphic with things like pretend your body is a tongue licking an ice cream cone, or roll your shoulders in and out,” Tan said. “It’s going to click for somebody.”

Besides being a pole dancing instructor, Tan works as a civil engineer and a Hawaiian hula performer. She doesn’t hide the fact that she’s a pole dancer — her Facebook profile picture is of her upside down on a pole in a matching black, sparkling bikini. Both arms are sustaining the weight of her body, her right leg is swung back to the pole, and her left is extended out.

Because of her civil engineering job, she said she is aware that employers are going to search her online. However, being an instructor in pole dancing gives her credibility. She’s never even been to a strip club.

By the time people do find out that she pole dances, they already know her as a person and don’t have any preconceived misconceptions about her, she said.

Pole dancing provides Tan an outlet to leave the outside world behind, while she develops tricks and focuses on her flexibility and strength.

“There is always something to work on, so it becomes a passion because you get so enamored,” Tan said. “Pole dance to me is one of the best addictions to have.”

Odette Tan has been a pole dancing instructor since 2012. She teaches advanced pole dancing classes at a studio called Brass Ovaries. Listen to Odette Tan talk about her family's support I was in a small town in Durango, Mexico when I learned that I had been accepted to NPR’s Next Generation Radio program. I, however, hadn’t seen that email asking for my confirmation because I didn’t have internet access. Fortunately, Doug Mitchell, the project founder, sent me a text to find out why I hadn’t responded.

I told him I was going to an internet café, but I didn’t take into account how long it would take me to answer that email. I walked to my aunt’s house, who then walked with me to the center of town and then we waited — she patiently; I impatiently– for the web pages to load on the computer screen. Hoping for the pages to load quickly in the town of Santa Clara was like asking the line at the Department of Motor Vehicles to move faster on a busy day.

Fast forward to many emails with my mentor Ruxandra Guidi, and I was finally in Austin recording audio in a pole dance studio. That is where I made my first technical error. Even though I held the mic close enough to my subject, Odette Tan, I hadn’t checked the levels or gotten that very important piece of sound called “room ambi.”

My week working on this multimedia story has been stressful and incredibly enjoyable at the same time. I not only interviewed a pole dancing instructor, I photographed and shot video of her and her students pole dancing. And then I went back to KUT and edited audio, posted on social media, submitted photos and video, and wrote a web story. With the guidance and help of my mentor, which I am incredibly thankful for, I submitted the full multimedia package.

I was able to focus on my subject and start learning more about her as I spent more time with her: that’s what I liked most about this journalism project. The women at the dance studio got to know me the first day I went in, and they allowed me back into their space the second time. My week here wasn’t only about learning the technical aspects of radio; it was also about getting to know Odette, and what questions to ask and how to tell her story.

Working on this project gave me a chance to talk to my mentor about her experiences and what opportunities are out there for me. It reinforced one thing: I know that my journalism path is one that I want to stay on. 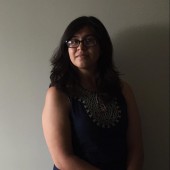 Perla Arellano is a current student at The University of Texas at Austin and will be graduating in the fall of 2016 with a degree in journalism. She was a part-time producer for Telemundo Amarillo, worked at the Amarillo Globe-News, and currently works as a student writer for the Department of Aerospace Engineering and Engineering Mechanics. She is a first-generation American, originally from Amarillo, Texas. Her roots are in Durango and Oaxaca, Mexico. She is working to gain experience to become a foreign correspondent.